Known for its profound wisdom and literary beauty, Buddhist literature is one of the finest treasures of human culture. In India, the cradle of the Buddha Dharma, the teachings were conserved mainly in two languages, Pali and Sanskrit. Sanskrit Buddhist literature was of central importance in the transmission of the Buddha’s wisdom to China and Tibet, where many of its texts survived in translation only. While the Sanskrit Buddhist tradition is alive today only in Nepal, its scriptures are regarded as most authoritative and sacred in the entire Mahayana Buddhist world and beyond. 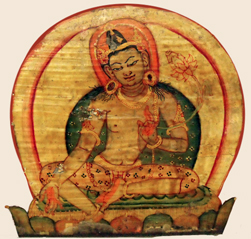 The Sanskrit Buddhist canon can be broadly categorised into the Buddha’s words (buddhavacana) in the form of sūtras and tantras, and commentarial literature, i.e. the śāstras. Great effort has been made in making these scriptures available, in Sanskrit and other languages, through various media, including digital texts on the internet (see for instance the Digital Sanskrit Buddhist Canon (DSBC) www.dsbcproject.org). Our project aims at adding another, we think important, page to this history.

Despite the wealth of Sanskrit Buddhist literature accessible to us today, very little of it is available in audio form (one of the few exceptions are the recordings produced by Siddhartha’s Intent International, available through www.deerpark.in).

The tradition has a long oral history, but few know what it might sound like, and even fewer have received training in the art of traditional recitation. We hope that by making these recordings available, there will be a greater appreciation of this treasury of wisdom which contains jewels of unsurpassable beauty.

This project started out of personal interest and was initiated by Christian Bernert in 2011, when he studied basic Sanskrit at the International Buddhist Academy in Kathmandu under Prof. Kashinath from the Nepal Sanskrit University, Kathmandu (Head of the Department of Buddhist Studies). The verses from Śāntideva’s Bodhicaryāvatāra that were taught in class were not only discussed from the linguistic point of view, but also recited out loud and sung in groups.This conveyed a whole new dimension to the study of these beautiful texts, which made the experience more vibrant and alive, and very enjoyable. Thinking that many academics and lovers of Sanskrit and Buddhist studies, as well as Dharma practitioners, might enjoy also this approach, we requested Prof. Kashinath to record the text in a studio. What we initially thought would be completed in a few hours eventually took over two years to complete. And this is, hopefully, only the beginning.

As an offering to the worldwide Buddhist and academic community, it is important for us that this material remains free of cost.

We would like to draw your attention to some private recordings by Mats Lindberg available here.

This work is licensed under a Creative Commons Attribution-NonCommercial-NoDerivatives 4.0 International License.

You may copy and distribute all the recordings on this site under the following creative commons agreement: the works may not be used for commercial purposes of any kind; the works may be copied, distributed, displayed, and performed with full attribution to the authors (www.bodhisvara.com), but may not be altered in any way, including no derivative works based on them.